Posted by Invention101 on September 10, 2018 in Welcome to All About Inventing! | ∞
WOW! Were you able to tune into Season 2, Episode 1 of Make48? Kudos to all contestants who took on the challenge to invent and solve a problem in only 48 hours.  Many of you know, it can take years to invent the next big thing, but what would you invent in only 48 hours?
The day started with 12 teams from across the country being given the challenge – OUTDOOR ENTERTAINMENT! In fact, as a patent attorney on the show, I learned about the topic when I arrived at the show for taping.  With the pressure of the clock ticking and the excitement of other teams in the room, teams hit the ground running and brainstormed their inventions.  I sat down with teams on the show and researched their inventions to determine if their inventions would be infringing on existing patents and also to determine if their inventions were patentable.
CLICK HERE TO WATCH SEASON 2, EPISODE 1 OF MAKE48 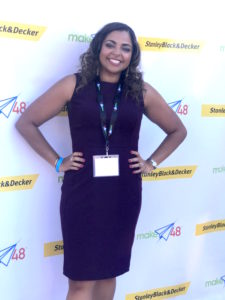 SPOILER ALERT
I received a great question from a viewer about my discussion with Team Believe.  After researching their invention, I found prior art that appeared to read on their invention.  Prior art is “anything” prior to your invention being filed. For example, a publication, a pending patent application or even an expired patent may be considered prior art.  I found an expired patent that appeared to have the same features and functions.  First, even if the contestants proceeded with that identical invention, they would not be infringing on the patent because it was expired and you cannot infringe on an expired patent.  It’s fair game for anyone to make an invention disclosed in an expired patent.  However, for patentablity purposes the team needed to have a feature that was useful, novel and non-obvious.  As you saw, they created a new mounting system for the light structure and that feature distinguished their invention from the prior art.
It’s critical to research your invention before investing in making it or filing for a patent application! Feel free to contact The Law Firm of Andrea Hence Evans, LLC, if we can help you to determine if your invention is patentable! Schedule a consultation!

Want to leave a note? Just fill in the form below.

Copyright © 2013-2020 ALL ABOUT INVENTING ™ All rights reserved.
This site is using the Desk Mess Mirrored theme, v2.2, from BuyNowShop.com.